How Three found a way to deliver long-term vision without sacrificing short-term gains.

Turning Brand Truth into Brand Response - Three does Mobile As It Should Be. 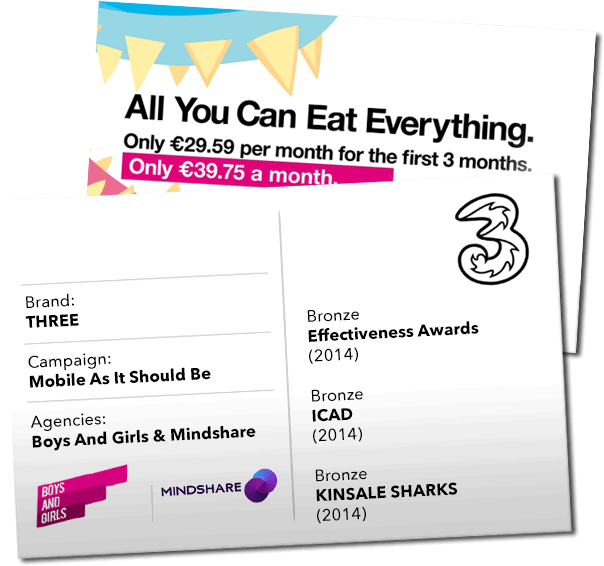 Why should you care?

In the past, accepted wisdom argued that there were two types of advertising campaign: Brand campaigns which sought to shape consumer attitudes over time and Direct Response tactical campaigns which tried to give promotional reasons to ‘close the sale’.

However in recent years, there has been strong commercial evidence that we can also develop Brand Response campaigns, which create long term emotional bonding AND short-term reasons to buy.

By 2012, the Irish mobile sector had started to stagnate. It was dominated by three big players – Vodafone, O2 and Meteor.

In contrast Three mobile was in distant fourth place with 6.2% value share. It  built its business on short-term tactical communications so consumers had no long-term reasons to choose the brand or stick with it over time.

The marketing and agency team identified a positioning- Three: Mobile As It Should Be – which allowed them to build emotional connection on human insights and also communicate specific product and service innovations.

This is a case which clearly demonstrates the sustainable value a Brand Response campaign can deliver to a business.

What did the brand do?

By the end of 2012, the Three brand lacked clear direction and despite great products, it didn’t really stand for anything.

The Three marketing and agency team worked with Red C research to identify a positioning as Customer Champion which allowed Three to capitalise on its market leading propositions like ‘All you can eat data’ but also build strong consumer connections based on insight.

This led to the development of a campaign proposition around ‘Three: Mobile As It Should Be’.

The media strategy sparked curiosity by following the true interests of existing and potential customers. There were innovative firsts around video-on-demand, using the whistle-stop break on Sky Sports, using curtain creative on MSN and using digital as a brand building tool.

Three moved their proportion of sales on Bill-pay tariffs over €40 from 2% to 24% year on year.

Three invested more media share of voice to demonstrate their business commitment to their new campaign.

Based on assumptions of Life Time Value, the return on investment in creative and media communications (ROMI) for 2013 activity was €1.92 for every €1 euro spent.

The results to date from this Brand Response campaign are very encouraging over only 12 months. It will be great to see how this continues over a longer time-frame, in line with international and Irish commercial evidence.

This is the story of how Three found its way, turning the mobile brand around with an idea that delivered a long-term brand vision without sacrificing short-term gains.

The campaign approach was broad enough to integrate big emotional messages about the true meaning of Christmas or being a die-hard supporter of the Irish soccer team with focused product messages about ‘All you can eat data’.

This is a story of a Brand Response campaign as it should be.

What more can we all do for our cases and campaigns?

Start pulling together the evidence and argument for your 2016 ADFX entry for your brand campaign. Entries to be submitted by 8th April

The best cases are strong collaborations between clients and their agencies.

These cases can provide ammunition for the value of advertising investment for the sceptics in the Boardroom, as well as across the wider business community.

What other inspiration is out there?

BACK TO NEWS ARCHIVE